Set between the Pacific Ocean and the western fringes of the Rocky Mountains, Oregon is a state diverse in climate and landscape, making it attractive for finches of all sorts, from domestic House Finches and Lesser Goldfinches to visitors from the high north. Last year, Red Crossbills of multiple types flocked to heavy Douglas-fir cone crops in the western part of the state. This year, bumper cone crops on high-elevation spruces and hemlocks set the stage for another great year for mountain finches. As we’ve headed into fall and almost now winter, crossbills and Common Redpolls have already visited much of Western States.

Before we get to the current Fall, I’d like to first report that while driving and hiking the high Cascades this summer, I noticed that heavy cone crops were developing in soft-coned conifers. The richest crops were found in the wettest forests of mountain hemlock and Engelmann spruce on the Cascade Crest, while moderate crops were present in the western hemlock and Douglas-fir forests downslope. Type 3 Red Crossbills were the first to respond, forming high-density breeding flocks. Surprisingly, the most frequent foraging tree was mountain hemlock, a species little documented as a key conifer for Crossbills, though they also made use of abundant Engelmann spruce cones.

As the fall neared, Pine Siskin, Type 1 Evening Grosbeak, and Cassin’s Finch numbers began to build in the Cascades. In late August, Carl Lundblad found a singing White-winged Crossbill among Type 3 Red Crossbills in the spruces and hemlocks of the Central Oregon Cascades, and then found two more nearby in September, an early sign of the irruption to come. Additional late summer records of White-winged Crossbills also came in from Western States, Washngton, Idaho, Wyoming, South Dakota, Colorado,  and Utah. 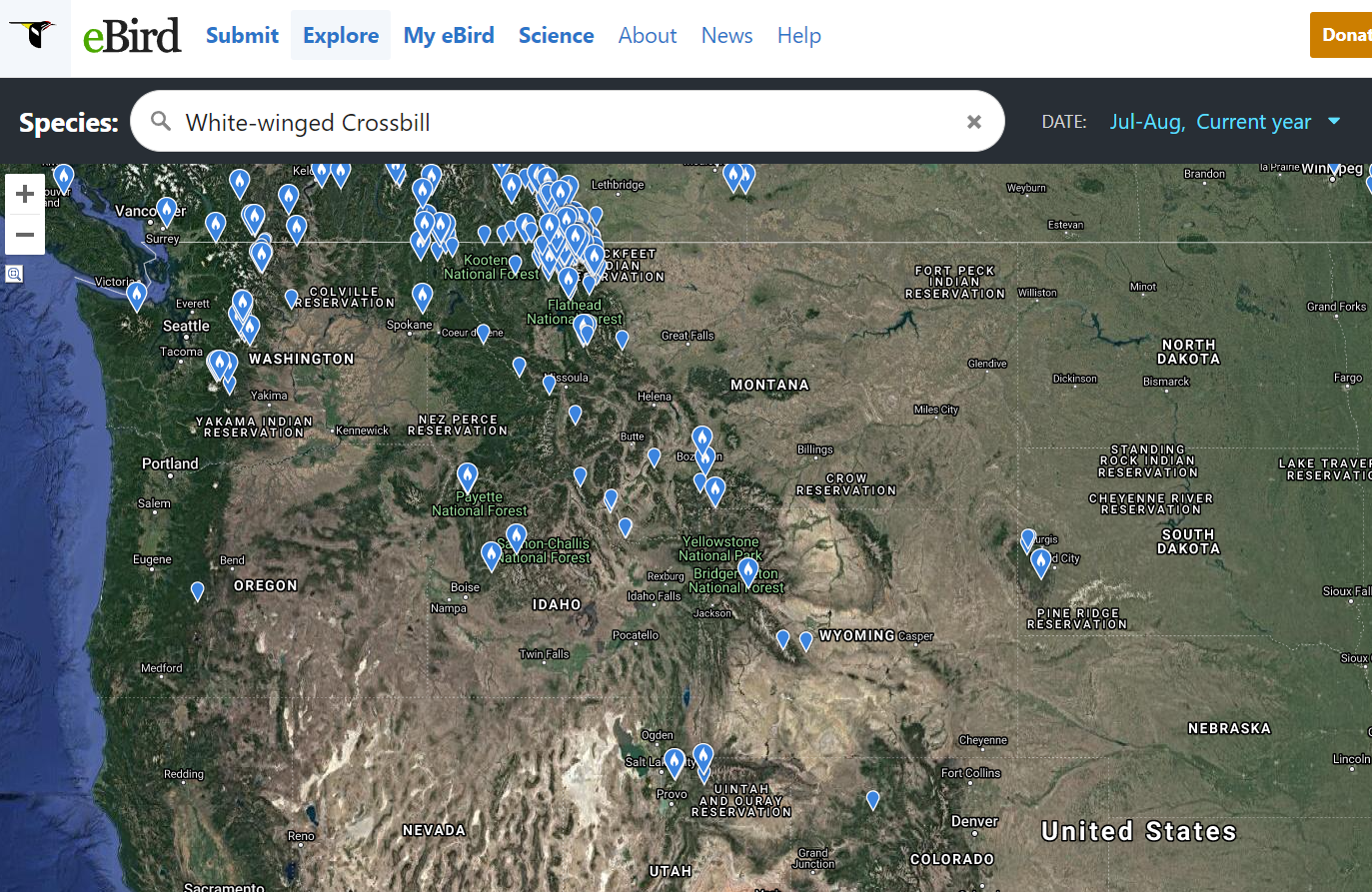 Birders from Oregon’s mild and highly populated Willamette Valley often make a yearly pilgrimage in January and February to the state’s northeast corner, which dips into the colder, drier Rocky Mountain zone near Northern Idaho, to try their luck at finding boreal finches and other arctic specialties. In some years, a long day of birding in the freezing wind of the Zumwalt Prairie might bring a small group of Common Redpolls (Acanthis flammea). In the best years even a flock of around 40-80 feeding on an isolated patch of weedy teasel on the remote Zumwalt Prairie of Wallowa County. Rarely, a flock of White-winged Crossbills (Loxia leucoptera) might be found foraging in the Engelmann Spruces (Picea engelmannii) of the nearby Wallowas or Blue Mountains. In other years, no boreal species are found at all.

This fall is shaping up to be one of the best on record, with finches arriving both early and in high numbers. Prior to this year, less than ten fall eBird records existed for Common Redpolls before November 20. This year, Common Redpolls and White-winged Crossbills reached Tollgate in the Blue Mountains of Northeast Oregon by early November. In the following weeks, they descended into multiple locations in the surrounding valleys. As I write this on the last day of November, Common Redpolls have already reached Central Oregon, Southern Oregon, and even the mild, coastal Willamette Valley and Oregon Coast, a very rare occurrence even in midwinter. Similarly, White-winged Crossbills are typically only detected in small numbers if found at all in any given year in the state, and this irruption also appears to be the earliest large movement in recent memory, with most records of flocks in irruption years not occurring until January or even February. Already, flocks of 70 White-winged Crossbills and 110 Common Redpolls have been reported in the state, apparently eBird record high counts for November.

Hearing about these exciting developments, my partner Courtney Kelly Jett and I decided to join a friend on a November 20 camping trip in the Blue Mountains south of Tollgate. I had never seen either of these irrupting species before, and thought we might have to go to Tollgate itself to find them. To our surprise we awoke to multiple Redpolls and White-winged Crossbills moving over the ridge we were camping on throughout the morning, along with Evening Grosbeaks, two Gray-crowned Rosy-finches, Red Crossbills of types 2 and 4, and many small flocks of Pine Siskins. We found our two target species at multiple locations on the surrounding forest roads. They seemed to spend the mornings moving quickly in flocks and calling. It was an experience I won’t soon forget — standing atop a remote ridge overlooking the canyons, meadows, and forests below as visitors from the arctic flew overhead. It will be interesting to see if these movements intensify in the west and across the United States as the winter continues.

Caleb Centanni is a Fisheries, Wildlife, and Conservation student at Oregon State University in Corvallis. Caleb studies the distribution and foraging ecology of Red Crossbill (Loxia curvirostra) call types in Oregon, and spends most weekends chasing crossbills in Oregon’s remote mountains. Caleb is also an avid birder and a musician, and is especially interested in bird vocalizations, their evolutionary importance, and their connection to music.

FiRN is a nonprofit, and has been granted 501c3 status. FiRN is committed to researching and protecting these birds and threatened finch species like the Evening Grosbeak, a species that has declined 92% since 1970. We are actively in the process of fundraising around an Evening Grosbeak Road to Recovery plan in addition to a student research project, so please think about supporting our efforts and making a small donation at the donate link below.